Sparking a passion for technology in the virtual classroom

11-year-old Chase is always creating videos about Fortnite for YouTube, making funny TikToks or playing video games on his PlayStation.

According to his parents Roland and Ellen Nairon, Chase has never been certain about what he wants to be when he grows up. But they recognized his passion for technology, which is why they enrolled him in Discover Coding classes in May.

“Knowing how much he enjoys technology, and Ellen being in technology, we kind of just figured, let’s see if he enjoys this, because we always thought this would be one passion he could transpire to work,” Roland says.

And when schools switched to online learning, the Nairons faced the same struggle as many.

“The challenge being parents through COVID is trying to provide some form of education and not be so boring,” says Roland. “The first few weeks, it was OK for him to read, but it wasn’t something that was going to last forever.”

With Discover Coding virtual classes, Ellen and Roland find their son is engaged and entertained while receiving the educational elements of the programs.

“There’s actually video and it’s far more engaging than what he’s been doing in school,” Roland says. “Discover Coding has been the most interactive.”

Another benefit is that Chase is independent when it comes to going to class on time.

“He pretty much sets himself up. He’ll get his stuff ready about 15 mins before class starts. Sometimes we’ll be like, ‘oh, Chase, are you in class?’ and he’ll already be logged in and started. We never had to worry about that,” says Ellen.

“Virtual is super convenient,” Roland added. “It’s the one thing where you don’t have to drive.”

Chase has tried four virtual Discover Coding programs and summer camps: Digital Makers: Young Writers Series, Hour of Python, Code Explorers and Minecraft. According to Chase, his favourite part of class is making things, including a website he created with HTML and CSS to showcase the story he wrote in class.

After a few classes, Chase exhibited a passion for computers, Ellen says. He decided he wanted to build his own gaming computer and created a list of the supplies he needed, which have since been ordered. Now Chase is excited to take on this new tech challenge.

Want to learn more about what online learning looks like with Discover Coding? We created a video that shows you what you can expect in our virtual classes.

Ready to sign up your child for a virtual class? Check out our program guide! We have online and in-person summer camps for all ages, skill levels and interests.

Discover Coding respectfully acknowledges that we are located on Treaty 6 territory, a traditional gathering place for diverse Indigenous peoples including the Cree, Blackfoot, Métis, Nakota Sioux, Iroquois, Dene, Ojibway/ Saulteaux/Anishinaabe, Inuit, and many others whose histories, languages, and cultures continue to influence our vibrant community. 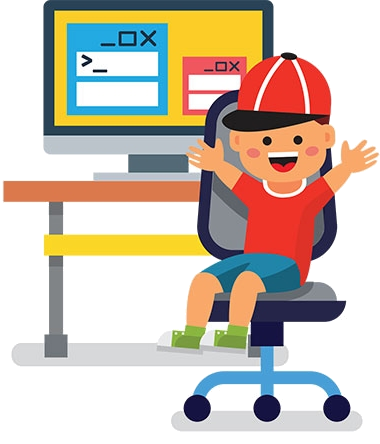